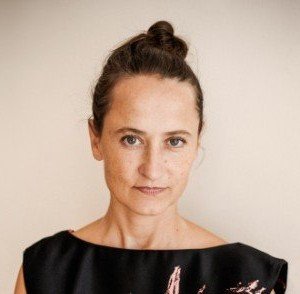 Sasha Waltz was born in Karlsruhe, Germany and studied dance and choreography in Amsterdam and New York. In 1993 she founded her company Sasha Waltz & Guests, together with Jochen Sandig in Berlin. In 1996 they both opened their own theatre Sophiensæle. From 2000 – 2005, Waltz was named one of the artistic directors of Berlin’s Schaubühne am Lehniner Platz where she created legendary pieces like »Körper«-trilogy (2000-2002). During the following years she created a new genre – the choreographic opera with productions like »Dido & Aeneas« (2005), »Medea« (2007), »Roméo et Juliette« (2007) and »Passion« (2010). Furthermore she implemented various »Dialogues”: »Dialoge 09 – Neues Museum” for the inauguration of Neues Museum Berlin and »Dialoge 09 – MAXXI« at MAXXI Museum Rome.
In 2013 Sasha Waltz created a choreography on Strawinsky’s »Le Sacre du Printemps« for the centennial celebration of the creation, with Mariinsky Ballet and Valery Gergiev, which premiered at Mariinsky Theatre in St. Petersburg in May 2013.
Together with Peter Weibel she curated the exhibition »Sasha Waltz. Installationen. Objekte. Performances«, which presented her work for the first time in the context of visual arts.
In 2014 Sasha Waltz staged Wagner’s »Tannhäuser« under the musical direction of Daniel Barenboim at the Staatsoper im Schiller Theater Berlin and choreographed Claudio Monteverdi’s »Orfeo« with Freiburger Barockorchester directed by Pablo Heras-Casado.
In 2016 Sasha Waltz developed the new format »ZUHÖREN« opening up a »third space« for the arts and politics. Together with musicians and dancers from her company, she inaugurated Elbphilharmonie Hamburg with her choreographic installation »Figure humaine«. Her work »Kreatur«, a collaboration with artist and fashion designer Iris van Herpen, was premiered in 2017 followed by »EXODOS«in 2018 at Radialsystem Berlin and Rauschen« in 2019 at Volksbühne Berlin.
Sasha Waltz was awarded several prizes, among them the Order of Merit of the Federal Republic of Germany in 2011. Since June 2013, Sasha Waltz is also a member of the Academy of Arts, Berlin.